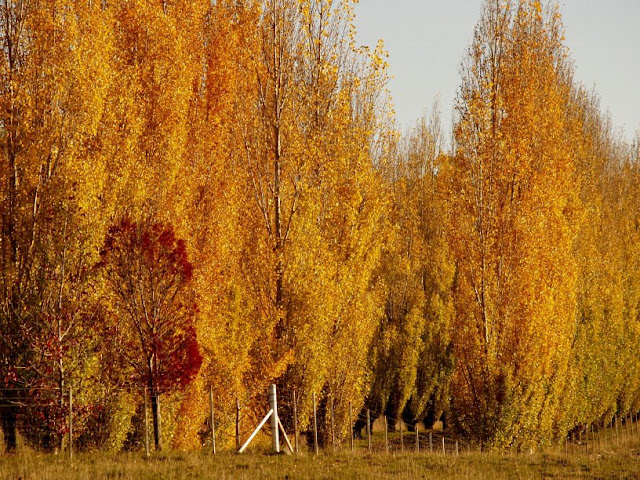 James Jordon at Points of Light is a photographer I admire not only for the captivating beauty of his work but also for his willingness to share tips on how he achieves these results. He writes of the Red Rule – “If you see something red, shoot it!” I think the little bit of red adds something to the golden gorgeousness of this shot.

Musing:
Binsey Poplars (Felled 1879) by Gerard Manly Hopkins
MY aspens dear, whose airy cages quelled,
Quelled or quenched in leaves the leaping sun,
All felled, felled, are all felled;
Of a fresh and following folded rank
Not spared, not one
That dandled a sandalled
Shadow that swam or sank
On meadow and river and wind-wandering weed-winding bank.

O if we but knew what we do
When we delve or hew—
Hack and rack the growing green!
Since country is so tender
To touch, her being só slender,
That, like this sleek and seeing ball
But a prick will make no eye at all,
Where we, even where we mean
To mend her we end her,
When we hew or delve:
After-comers cannot guess the beauty been.
Ten or twelve, only ten or twelve
Strokes of havoc únselve
The sweet especial scene,
Rural scene, a rural scene,
Sweet especial rural scene