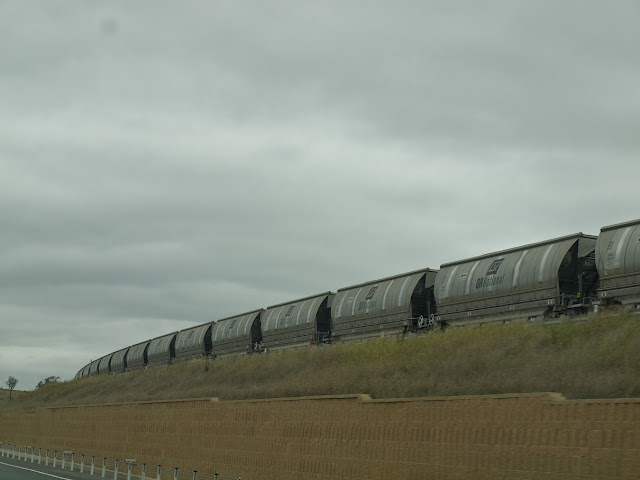 And the other thing this area is famous for is coal ... lots and lots of coal production can be seen from the road.  I have written of the coal mining that occurs in the Western Coalfield on our drive to Clandulla but here in the Hunter coal mining is even greater.

I did a bit of research on the coal fields and this is what I found on the NSW Mineral Council's site.

The Hunter coalfield is the largest coal-producing region in NSW, currently concentrated around the Singleton and Muswellbrook districts. It produces the bulk of thermal coal for NSW’s electricity generation needs as well as for export markets. The Hunter coal seams are mostly at shallow depths of less than 300 metres, enabling cost effective multi-seam, open cut mining operations.

The Western coalfield extends from near Lithgow to Rylstone, producing mostly thermal coal for local coal-fired power stations and cement manufacture with small quantities exported. Whilst mining has been undertaken in this region for many years, significant resources identified in the Lithgow and Ulan seams around Rylstone and the Ulan-Bylong area remain for development.

The Southern coalfield produces hard coking coal needed for steel production.   There are also the Gunnedah and Newcastle coalfields.