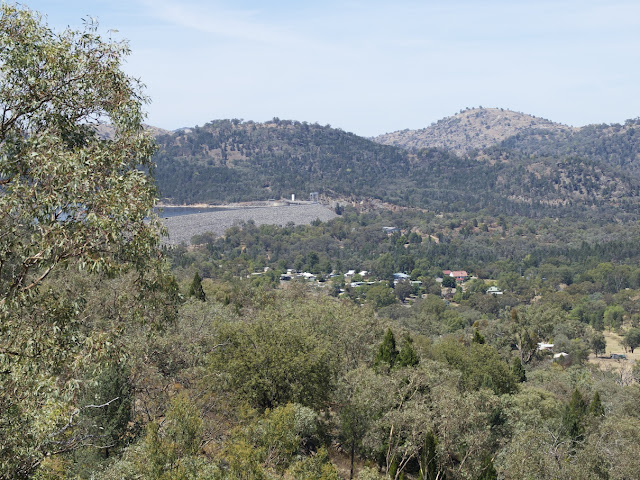 Whoo hoo it's a town!

You can imagine my horror when Lady Tom Tom squarked "you have reached your destination" and there was nothing, just trees and a sign post to places we had been.  Despondently we decided to trundle down the road towards the water's edge.  Great was my delight when a few kilometres later I saw this clutch of houses nestled below the dam wall.  And Mark you were right there was once an older town drowned beneath the waters but a new one was established ... whew.

Go visit 100 towns to see the Village of Wyangala Dam.

Now for a later problem, when I was tidying up the 100 towns blog last night I discovered I had done the town of Rylstone twice!  But no, I have not missed my target.  On the way from Wyangala to Cowra we went through Darby's Falls which I was surprised to find was another town.  So instead of it being a bonus town it saved my bacon! I've slotted Darby's Falls in position #76 to replace the duplicated town.

Hope you all have some New Year's Eve fun tonight.