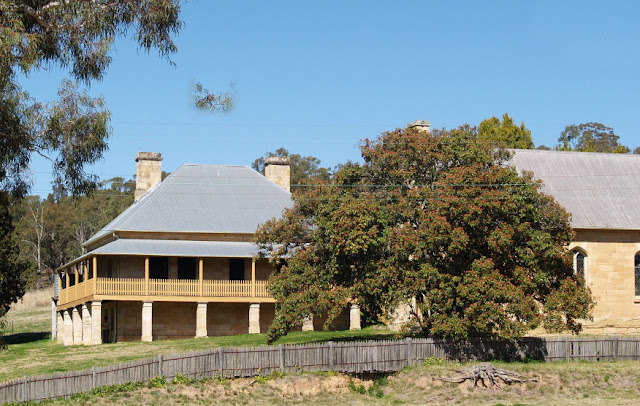 Just over the mountains to the west is the town of Hartley -- a wonderful assortment of sandstone buildings dating from convict times. In those days, when it was a three to four-day horseback ride to Sydney, Hartley was designated as a future regional centre. Farms like those in yesterday's photo were developed in the area and the settlers were assigned convicts. Quite often, though, the convicts got out of hand and by the 1830s there was a need for a police station and court house. The Hartley Court House, one of the standstone buildings, was built in 1837, mainly to cope with these unruly convicts.

Today the town is heritage listed. While it is lively enough during the day with visiting tourists, there are just two families left actually living in the town.

Musing:
From Old Botany Bay by Mary Gilmore
"I was the conscript
sent to hell
to make in the desert
the living well;

I bore the heat,
I blazed the track-
furrowed and bloody
upon my back.

I split the rock;
I felled the tree:
The nation was-
Because of me!

Old Botany Bay
Taking the sun
from day to day...
shame on the mouth
that would deny
the knotted hands
that set us high!