Some thoughts on the death of towns 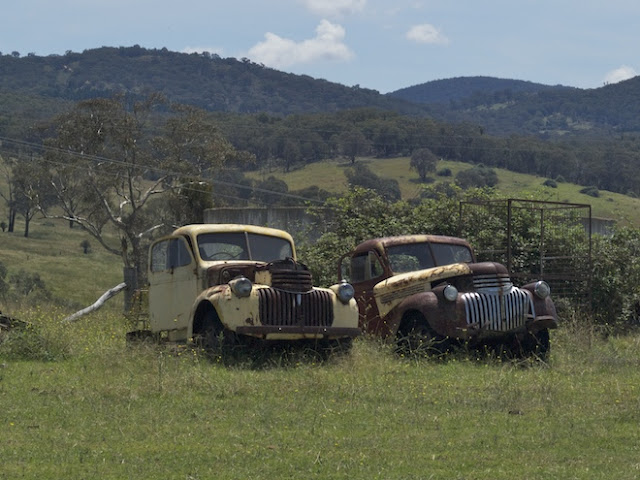 We spotted this couple of old girls on the way to the small town of Peel.

JM and Diane have made a comments recently about the high number of dead towns I am finding.  I have been thinking about that too. One reason is that all this area was gold mining country and they were gold rush towns. Some had thousands of residents during their brief history but the homes were usually of canvas that was packed up and moved when news of a better field spread. Some continued or revived when reef mining followed but that too dwindled. The more substantial settlements transitioned to supporting the local rural industry.

Another factor is that some of the towns were staging posts and inns during the horse and buggy days. These were quite close together, much closer than we need today. The car killed them. And some still struggling died when the highway bypassed them or the bitumen road never reached them.

Others sprung to life as railway towns when the railway came their way, again quite close together to facilitate taking on water and coal for the steam engines.  And if the railway didn't come to your town because of terrain or whatever that meant likely death because it could not establish itself as a hub for transporting rural produce.  And when the railway shut down the town began to shut down too.

Add to this consolidation of smaller rural properties into larger properties, mechanisation requiring fewer rural workers and no industrial base all leading to the drift from the country to the coastal cities where work could be found.  The older folk left behind die and the town dies with them.

And there is nothing much left because most of the buildings were of timber, not stone. This meant they could be easily transported, burnt down, or eaten by termites.  So unlike South Australia where you find stone ghost towns you don't find that here.

Drought, depopulation of youth due to the wars, and changes in fortune for particular rural produce such as wool would all have played their part.  And that is all I can think of right now.