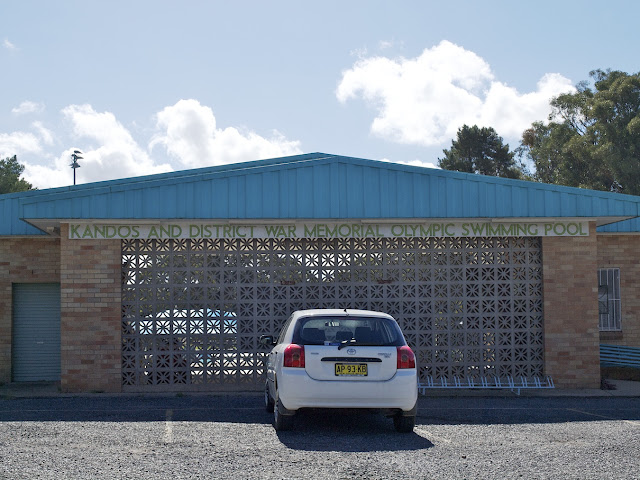 Today is Anzac day, the day we remember our war heros and in thinking of an appropriate tribute I remembered that Kandos has a War Memorial Swimming Pool. There are lots of such pools in Australian county towns, built in the 1960s.

Why War Memorial Swimming Pools?  I tried to do some research and could not find the exact facts but I think it was a government funded infrastructure scheme rather like the Economic Stimulus plan today causing the countryside to be dotted with new school halls.

Why swimming pools?  Australia is a warm country and our swimmers were succeeding well at the Olympics so swimming was popular.  Note that this is an Olympic swimming pool which is actually a reference to it being 50 metres long - not all towns could afford to build such a big pool.  By the 1960s the sea baths were polluted with sewage and the swimming holes in inland creeks getting clogged from fertilisers causing water plants to grow.  Clean swimming pools were seen as a national priority.

While am sure the 'diggers' from the Returned Services League (RSL) would have had some say on a local war memorial project such as this, I think the links with them being an actual memorial are rather weak.  The wreaths today are more likely to be laid at the town memorials rather than the swimming pools.

This had me asking another question -- where is the town War Memorial in Kandos? The clock I have already shown occupies the spot where I would usually look. So I went to see what I could discover,   I'll show you what I found tomorrow.