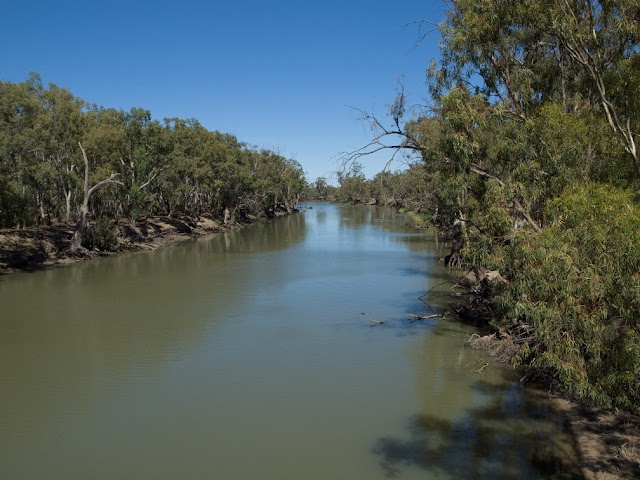 At Hay we see the Murrumbidgee River for the first time. The one feeding the irrigation area we have been driving through. The rivers are bordered by broad river flood plains. 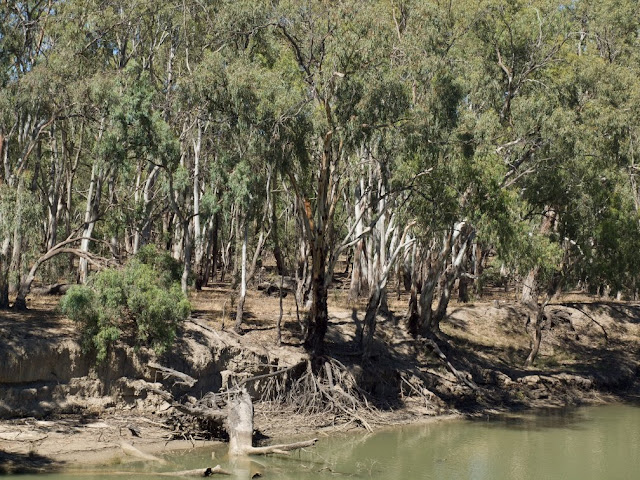 The Explorers of Australia and their Life-work (1908) by historian Ernest Favenc has some interesting insights into the discovery and naming of the river.
"Here we may remark on the tenacity with which the Murrumbidgee River long eluded the eye of the white man. It is scarcely probable that Meehan and Hume, who on this occasion were within comparatively easy reach of the head waters, could have seen a new inland river at that time without mentioning the fact, but there is no record traceable anywhere as to the date of its discovery, or the name of its finder. When in 1823 Captain Currie and Major Ovens were led along its bank on to the beautiful Maneroo country by Joseph Wild, the stream was then familiar to the early settlers and called the Morumbidgee. Even in 1821, when Hume found the Yass Plains, almost on its bank, he makes no special mention of the river. From all this we may deduce the extremely probable fact that the position of the river was shown to some stockrider by a native, who also confided the aboriginal name, and so it gradually worked the knowledge of its identity into general belief. This theory is the more feasible as the river has retained its native name. If a white man of any known position had made the discovery, it would at once have received the name of some person holding official sway."