Wayfaring by the sea 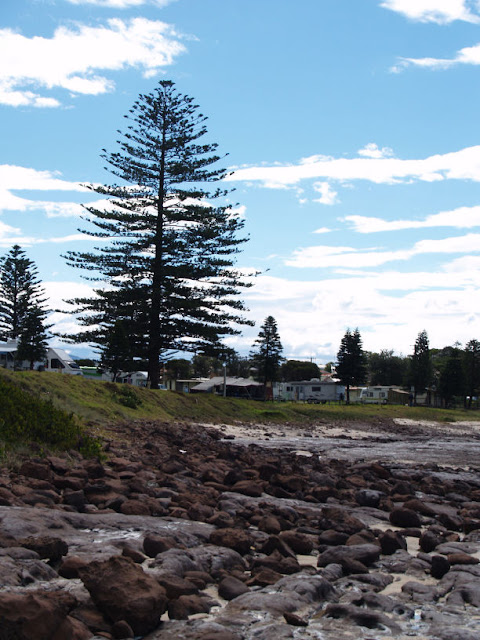 We've been wayfaring again at last and in gorgeous summer weather. The first week was given over entirely to rest at Shellharbour which about 100kms south of Sydney. We had a delightful spot right on the water, just the place for me to try to learn how to photograph the sea splashing on the rocks.

The trees are Norfolk Island pines, which are not native to Australia (they come from Norfolk Island) but appear just about everywhere at the beach.
Musing:
I filled in time reading several books on Australian History while on holiday. In 1788 The Brutal Truth about the First Fleet by David Hill there is info about the first white settlement of Norfolk Island as well as Australia. "[Govenor] Phillip's instructions, signed by King George III, had explicitly called for early settlement of Norfolk Island [as well as Australia]... The British wanted to secure the island, which had been noted by Cook on his voyage eighteen years earlier, as part of the empire. It was believed it could produce a superior hemp or flax for sails and canvas -- both vital for the Royal Navy."
The flax turned out to be a dud but the trees weren't.