April 06, 2008
We were in Sydney attending a wedding this weekend. On a sparkling bright autumn day by the harbour it is impossible for me to not love this city's heart. 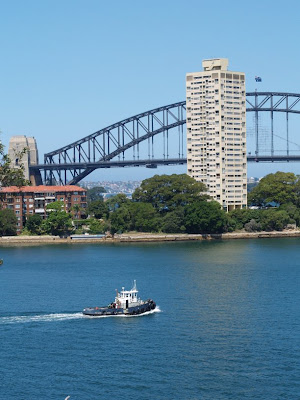 Musing:
From Sydney by Geoffrey Moorhouse
"Anthony Trollope came as near as possible to getting it right when he wrote, 'I despair of being able to convey to any reader my own idea of the beauty of Sydney Harbour. I have seen nothing equal to it in the way of land locked sea scenary, nothing second to it ... It is so inexpressably lovely that is makes a man ask himself whether it would not be worth his while to move his household goods to the eastern coast of Australia, in order that he might look at it as long as he can look at anything.'

Trollope wrote that something over one hundred years ago, and I know exactly how he felt. Much has changed in the years between, but not that instant recognition of inexpressible loveliness which man astonishingly, has not yet destroyed."