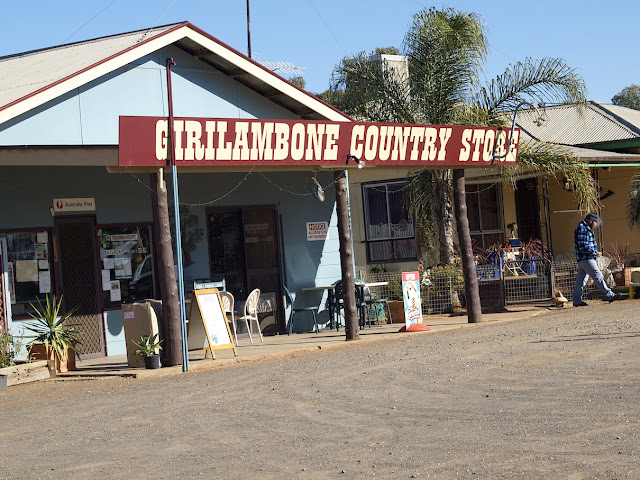 I was very pleased because I thought we were going to pass through Gulargambone.  Why I want to see Gulargambone I don't know, I think it is because it has such a great name.  Perhaps one of our bush poets wrote about it.   AD Hope is not a bush poet but he did put Gulargambone  in his poem Country Places which is about "weird names, some beautiful, more that make me laugh."

Anyway, it turns out we were not a Gulargambone but at Giralambone -- which proudly announced itself as a Tidy Village winner.  It can't take a lot of effort to become a tidy village ... mow the front lawns of the one or two houses and take a beaten up car or two to the dump.  There is not a lot here, the general store and the skeleton of the old railway station which gave it birth.

As it happens Giralambone does have a literary connection. It's the historic location of the incidents in the story "The Chant of Jimmy Blacksmith"  by Thomas Kaneally.   [Opps wrong.  The schoolteacher  Helena Kerz murdered in the incident is buried here, the location of the events was Breelong]