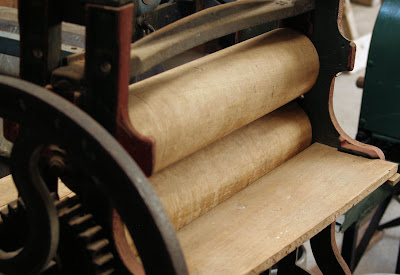 Down this end of Gulgong is the local musuem, a wonderous place full of every conceivable object from country life. Having grown up in the bush where nothing is thrown out and in an era when 'old things' were used much longer, there is much that is familiar in the museum. The old mangle reminded me of Monday mornings (before the washing machine) -- the boiling copper, sheets rinsed in blue, school clothes dipped in starch and my mum semi-whistling hymns as she turned the handle of the old mangle mounted on the cement wash tubs. As it happens, my Mum was a member of the Salvation Army, so this poem by a famous American poet amuses me just about as much as the museum.
Musing:
Washerwoman by Carl Sandberg
"The washerwoman is a member of the Salvation Army.
And over the tub of suds rubbing underwear clean
She sings that Jesus will wash her sins away
And the red wrongs she has done God and man
Shall be white as driven snow.
Rubbing underwear she sings of the Last Great Washday."