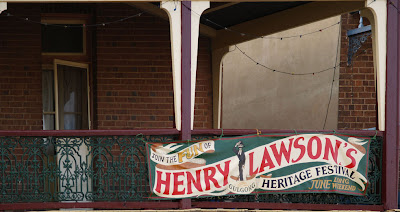 After Yoeval we drove to Gulgong because we had heard the Henry Lawson Festival was on. I admire Henry Lawson's writing, particularly his short stories. Henry, a quintessential Australian writer from the turn of the century (last century not this one) apparently lived his early life in Gulgong.

Musing:
From Faces In The Street by Henry Lawson
They lie, the men who tell us for reasons of their own
That want is here a stranger, and that misery's unknown;
For where the nearest suburb and the city proper meet
My window-sill is level with the faces in the street
Drifting past, drifting past,
To the beat of weary feet
While I sorrow for the owners of those faces in the street.

And cause I have to sorrow, in a land so young and fair,
To see upon those faces stamped the marks of Want and Care;
I look in vain for traces of the fresh and fair and sweet
In sallow, sunken faces that are drifting through the street
Drifting on, drifting on,
To the scrape of restless feet;
I can sorrow for the owners of the faces in the street.

I wonder would the apathy of wealthy men endure
Were all their windows level with the faces of the Poor?
Ah! Mammon's slaves, your knees shall knock, your hearts in terror beat,
When God demands a reason for the sorrows of the street,
The wrong things and the bad things
And the sad things that we meet
In the filthy lane and alley, and the cruel, heartless street."