June 09, 2008
We went wayfaring at last over the long weekend, staying over for a couple of days at the country town of Wellington. It's apparently the second oldest town west of the Blue Mountains and carries its history well.

Reminds me that a few weeks ago my husband was picking me up from my office via a different route and rang for some guidance on how to get there. You turn into Wellington Road I said. Sometime later he arrived somewhat frustrated, having found his way via Waterloo Road. 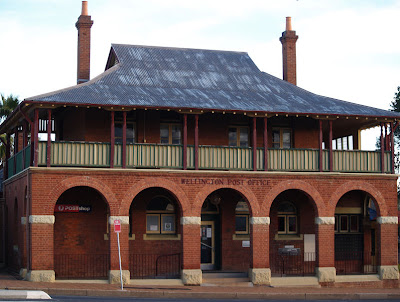 Photo: Wellington Post Office
Musing:
From the Eve of Waterloo by Lord Byron
"THERE was a sound of revelry by night,
And Belgium's capital had gathered then
Her beauty and her chivalry, and bright
The lamps shone o'er fair women and brave men.
A thousand hearts beat happily; and when
Music arose with its voluptuous swell,
Soft eyes looked love to eyes which spake again,
And all went merry as a marriage bell;
But hush! hark! a deep sound strikes like a rising knell!

Did ye not hear it? -- No; 'twas but the wind,
Or the car rattling o'er the stony street;
On with the dance! let joy be unconfined;
No sleep till morn, when youth and pleasure meet
To chase the glowing hours with flying feet.
But hark! -- that heavy sound breaks in once more,
As if the clouds its echo would repeat;
And nearer, clearer, deadlier than before;
Arm! arm! it is -- it is -- the cannon's opening roar!"