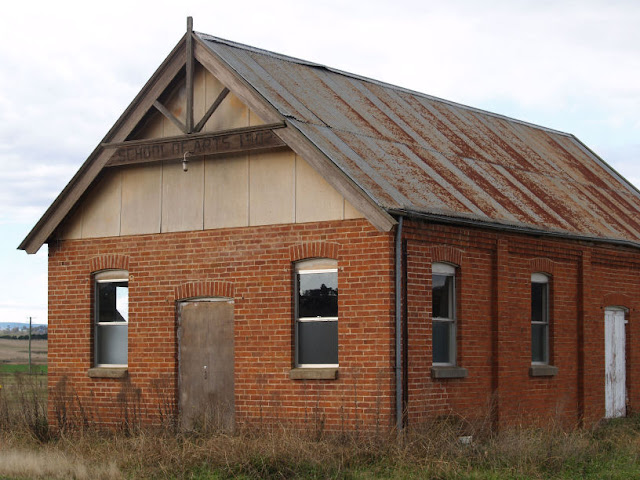 Mechanics Institutes and Schools of Arts are also quite common in old towns. These were apparently libraries for the education of working men and a social gathering spot. I imagine some great local dances were held in this old hall which pops up in the country side in much the same way as the country churches. I got a shot of it in the distance so you can see how it's pretty much isolated from any sort of town, though there is a small one called The Lagoon up the hill where we were when I took the distance shot.

Musing:
From Country Towns by Kenneth Slessor
"Country towns, with your willows and squares,
And farmers bouncing on barrel mares
To public houses of yellow wood
With "1860" over their doors,
And that mysterious race of Hogans
Which always keeps the General Stores….

At the School of Arts, a broadsheet lies
Sprayed with the sarcasm of flies:
"The Great Golightly Family
Of Entertainers Here To-night"–
Dated a year and a half ago,
But left there, less from carelessness
Than from a wish to seem polite."