My love is otherwise 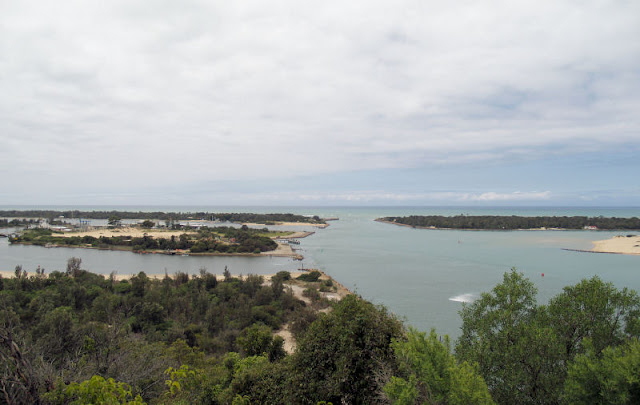 We swung out to the coast one last time at Lakes Entrance where a network of inland waterways known as the Gippsland Lakes meets the sea. Our last glimpse of the coastline.
The truth is, as much as I enjoyed my sojourn by the sea, I was looking forward to the still heat of the inland, away from the constant swoosh of the waves and the persistent flapping from the sea breeze. My friend Peter says there are "saltwater" people and "freshwater" people -- no guesses as to where I fit.
Musing:
From Breath by Tim Winton
"When I asked if I could just ride out to the rivermouth with Loonie he shook his head. Too rough, too far, no way. But I wanted to swim where I could see the bottom, to be where those long creaming breakers trundled in from the south so I could dive down and see them pass overhead. I hankered after the sea as I'd never done for anything else before. I'd always been a compliant, respectful child and until that point I was usually content. But being denied access to the ocean was intolerable"